As Fred Boss, @fboss, is fond of saying - "The Education twitter chat #edchatie takes place on Monday evenings from 8.30 to 9.30 pm, did I mention it's on from 8.30 to 9.30 pm on Monday nights?"
Well the 50th #edchatie took place lastnight and although I couldn't take part because of prior commitments, I really enjoyed reading over the transcript today.
http://edchatie.pbworks.com/w/file/fetch/51600001/edchatie%20Number%2050.pdf

The stream was fast and furious, many reckoned it was the busiest #edchatie to date, this is most likely due to the phenomonally successful CESI Conference in Portlaoise on February 26th/27th. http://cesi.ie/conference-2012

I thought I'd write a quick post just to say well done to all taking part and also to throw in my two cents worh on some of the topics raised.

Well done all on the 50th #edchatie!!

Lastnights topic was suggested by @seomraranga "Technology on a Budget" and was inspired by the release last week of the Raspberry Pi, which is an arm-based computer on sale for £25. It's the size of a credit card, peripherals are added through usb and it looks like this: 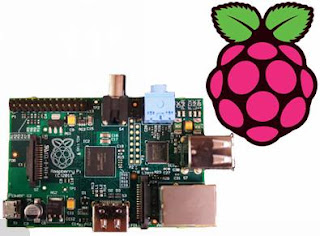 For more info go to http://www.raspberrypi.org/


The Arduino was also mentioned lastnight - http://www.arduino.cc/ and it's the arduino that I've been playing with recently. So far I've worked my way through most of this book from O Reilly 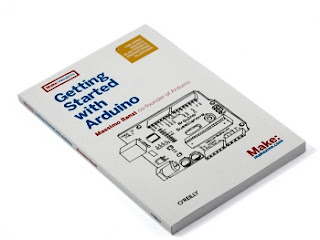 It's easy to follow and I'd say ideal as a guide for teachers intending teaching programming and or electronics. I should mention that I'm neither a programmer nor have I any electronics experience - but I found with a little perseverance I could follow the various projects. You hook up the Arduino board to your computer via usb, download and install the developer environment and then upload and execute little programmes or "sketches" on the arduino causing the led to blink or whatever. It looks like this - 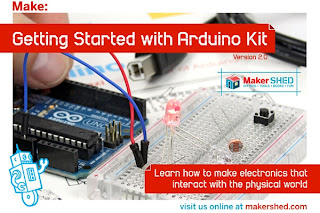 So although you begin with the very basics, making an led blink, the open nature of this hardware/software combination means there's very little limiting the imagination and in no time your students may come up with something like this -

But I'm getting ahead of myself and am in danger of misrepresenting #edchatie! The Monday evening chats are about teaching and learning. Often technologies that can enhance education are discussed. The focus lastnight was on technology on a budget which is why the above examples arose. The cost of providing a consistent IT hardware environment for schools is prohibitive and in this context the idea of #byod - Bring Your Own Device was mentioned on a number of occasions. Perhaps if schools can provide a consistent online environment, ie Moodle + Google Apps, then we should just allow students to bring whatever devices to connect? @cullej29 wondered whether schools gave out the ssid password for their wifi networks to students using their own devices, and certainly care needs to be taken in this area. In St Aidan's CS Brookfield Tallaght, the school I was involved with over the past 5 years, we had always used an open wifi network until last year. Since the schools wired network was visible from the open wireless network and protection afforded by pasword protected shares only, we decided to separate the networks. So a separate VPN - virtual private network - was set up and protected with an encrypted password that only teachers have access to.

Another excellent idea mentioned lastnight was the DISC or Drop in Support Centre. This would allow students to share their expertise with each other and with staff. Many teachers mentioned the TCO - Total Cost of Ownership of computers in schools as not neccessarily being about the cost of the hardware but more about the ongoing cost of keeping that hardware up and running, by implementing a DISC the need for outside support should fall and the amount of in-house expertise should rise. In St Aidan's we looked after computer maintenance by cloning. Essentially, once a laptop needed repair we simply cloned it from a previously stored image. For this we used Clonezilla, an open source solution that any teacher could be trainind to use in less than an hour. Rebuilds take 10 - 15 minutes depending on hard disk size.

I see that my own name was taken in vain lastnight too - this from Stephen Howell, @saorog "@donenda #edchatie just say Linux 3 times and @rherron will appear" Hands up, I am absolutely a believer in using open technologies in Education and elsewhere, but I am inclined to agree with @doneda and @simonlewis - you will meet much resistance from teaching staff already proficient in using MS Office, and although Libre Office has come on in leaps and bounds over the past 18 months it still has some ground to make up.

But away from the techie end of things, what came through for me reading over the transcript today is the amount of great tools which can be incorporated into teaching and learning by any teacher. Tools like edmodo, twitter, audacity, scratch, moodle, sketchup .... the list goes on.

My own personal favourite at the moment is Modkit. As I said earlier I've been messing with the Arduino and am eagerly awaiting delivery of the Raspberry Pi. I'm tinkering out of a desire to learn programming and to see if I could get to a level where I could teach others how to do this. I know that Scratch has had great traction among teachers which is fantastic, but how about this respin of Scratch for the Arduino platform - http://www.modk.it/

I'll finish with David Putnam's talk in the Science Gallery last week - http://www.sciencegallery.com/events/2012/02/open-minds-david-puttnam-technology-education-and-ireland-how-new-ways-learning-can-a
It was great to see so many familiar faces at this event including @simonlewis, @camaraireland and @humphreyjones! But I'll finish with this thought, towards the end of the discussion after his presentation David Putnam was asked what single quick change could have an immediate impact on the role of technology in teaching and learning. Putnam immediately cited the example of a classroom he recently visited where student were learning WWII History through various media including film and poetry. He was greatly impressed and suggested to the teacher that she perhaps strip out the film's audio and relplace it with her students reciting war poetry over the footage. The teachers response was that that would be illegal since remixing copyright content is now allowed. David Putnam's suggestion - to change copyright law to allow student to do at school what they're already doing at home, remixing and repurposing content as an ongoing form of digital expression.